Create an Account - Increase your productivity, customize your experience, and engage in information you care about.

Your water meets state and federal regulations for safety.

Last year we conducted more than 500 tests for over 80 drinking water contaminants. This report is a snapshot of the quality of the water we provided in 2017. Included are details about where your water comes from, what it contains, and how it compares to Environmental Protection Agency (EPA) standards. We are committed to providing you with the information because we want you to be informed. For more information about your water call 912-876-8216 and ask for Robert Norby.

Some people may be more vulnerable to contaminants in drinking water than the general population. Immuno-compromised persons such as persons with cancer undergoing chemotherapy, persons who have undergone organ transplants, people with HIV/AIDS or other immune system disorders, some elderly, and infants can be particularly at risk from infections. These people should seek advice about drinking water from their health care providers. EPA/Center For Disease Control guidelines on how to lessen the risk of infection by Cryptosporidium and other microbial contaminants are available from the Safe Drinking Water Hotline 800-426-4791.

Source water assessment information may be obtained from contacting Robert Norby at 912-876-8216.

Our City Council meets the first and third Thursday of each month at the Hinesville City Hall. Please feel free to participate in these meetings.

Drinking water, including bottled water, may reasonably be expected to contain at least small amounts of some contaminants. The presence of contaminants does not necessarily indicate that water poses a health risk. More information about contaminants and potential health effects can be obtained by calling the EPA’s Safe Drinking Water Hotline 800-426-4791.

The sources of drinking water (both tap water and bottled water) include rivers, lakes, streams, ponds, reservoirs, springs, and wells. As water travels over the surface of the land or through the ground, it dissolves naturally occurring minerals, and can pick up substances resulting from the presence of animals or from human activity.

Contaminants that may be present in source water before we treat it include:

•    Microbial contaminants, such as viruses and bacteria, which may come from sewage treatment plants, septic systems, agricultural livestock operations, and wildlife.

•    Inorganic contaminants, such as salts and metals, which can be naturally occurring or result from urban storm water runoff, industrial or domestic wastewater discharges, oil and gas production, mining, or farming.

•    Pesticides & herbicides, which may come from a variety of sources such as agriculture and residential use.

•    Radioactive contaminants, which are naturally occurring.

•    Organic chemical contaminants, including synthetic and volatile organic chemicals, which are by-products of industrial processes and petroleum production, and also can come from gas stations, urban storm water runoff, and septic systems.

To ensure that tap water is safe to drink, EPA prescribes regulations that limit the amount of certain contaminants in water provided by public water systems. We treat our water according to EPA’s regulations. Food and Drug Administration regulations establish limits for contaminants in bottled water, which must provide the same protection for public health.

If present, elevated levels of lead can cause serious health problems, especially for pregnant women and young children.  Lead in drinking water is primarily from materials and components associated with service lines and home plumbing.  Hinesville’s Water System is responsible for providing high quality drinking water, but cannot control the variety, of materials used in plumbing components.  When your water has been sitting for several hours, you can minimize the potential for lead exposure by flushing your tap for 30 seconds to 2 minutes before using water for drinking or cooking.  If you are concerned about lead in your water, you may wish to have your water tested.  Information on lead in drinking water, testing methods, and steps you can take to minimize exposure is available from the Safe Drinking Water Hotline or at http://www.epa.gov/safewater/lead.

The table in this report lists all the drinking water contaminants we detected during the 2017 calendar year. The presence of these contaminants in the water does not necessarily indicate that the water poses a health risk. Unless otherwise noted, the data presented in this table is from testing done January 1 through December 31, 2017. The state requires us to monitor for certain contaminants less than once per year because the concentrations of these contaminants are not expected to vary significantly from year to year. Some of the data, though representative of the water quality, are more than one year old.

•    AL: Action Level - the concentration of a contaminant which, when exceeded, triggers treatment or other requirements that a water system must follow.

•    MCLG: Maximum Contaminant Level Goal - the level of a contaminant in drinking water below which there is no known or expected risk to health. MCLGs allow for a margin of safety.

•    MCL: Maximum Contaminant Level - the highest level of a contaminant that is allowed in drinking water. MCLs are set as close to the MCLGs as feasible using the best available treatment technology.

•    MRDL: Maximum Residual Disinfection Level - The highest level of a disinfectant allowed in drinking water. There is convincing evidence that addition of a disinfectant is necessary for control of microbial contaminants

•    MRDLG: Maximum Residual Disinfection Level Goal - The level of a drinking water disinfectant below which there is no known or expected risk to health. MRDLGs do not reflect the benefits of the use of disinfectants to control microbial contaminants.

•    pCi/l: Picocuries per liter (a measure of radioactivity)

•    ppm: Parts per million or milligrams per liter -- (corresponds to one minute in two years)

•    TT: Treatment Technique - A required process intended to reduce the level of a contaminant in drinking water 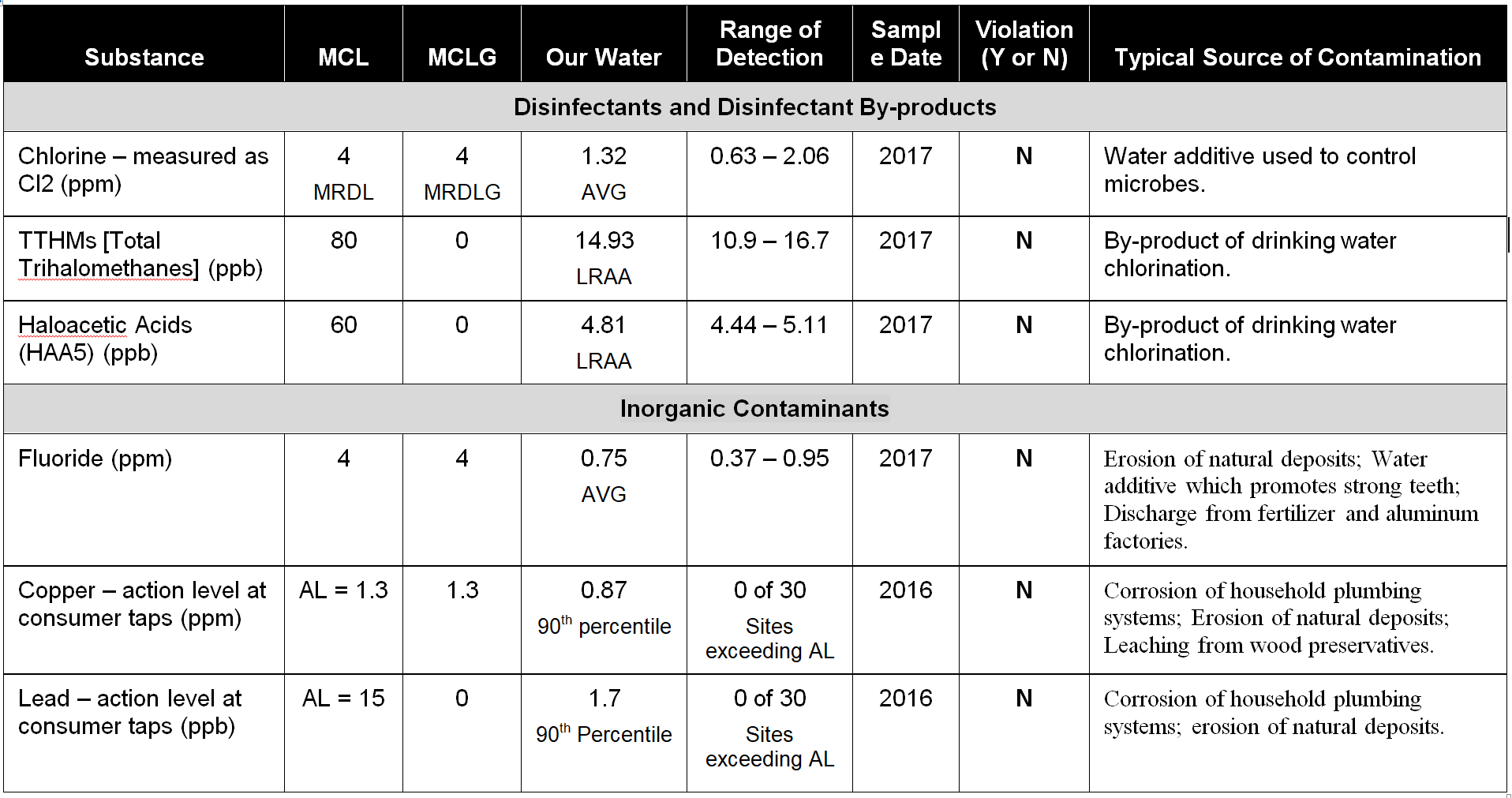